A very dark day in this country. A lot still needs to be learned. mrossol

Scoop — The Federal Bureau of Investigation @FBI today executed a search warrant at Mar-a-Lago, two sources confirm to @Fla_Pol. “They just left,” one source said. Not sure what the search warrant was about. TBH, Im not a strong enough reporter to hunt this down, but its real. 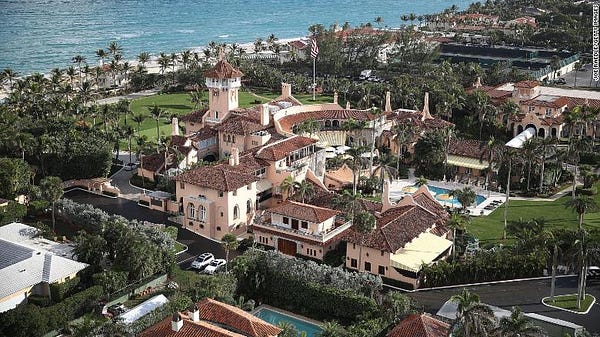 The raid’s rationale remains unknown. Corporate media pundits speculated yesterday the raid was related to some “missing” National Archive documents Trump was supposed to have taken with him when he left office. In its article about the raid, for example, the Wall Street Journal noted that “Officials can face up to five years in prison for removing classified materials.” But that theory turned out to be a hot take and has mostly dried up since it emerged online that the documents had been returned to the National Archives weeks ago.

Neither DOJ or FBI commented, citing an ongoing investigation.

Trump wasn’t there when the FBI raid happened; he was in New York. President Trump’s lawyer Christina Bobb, who was present during the search, confirmed that federal agents “seized paper.” A statement from the former President said agents also broke into his safe. Eric Trump, who was on site, told reporters the safe was empty, nothing was found in it.

It is impossible to underestimate how politically significant this raid will be.

In a two-page letter released after the raid, President Trump used the term “banana republic,” and he’s not wrong. There’s a reason why former presidents have always been off-limits for criminal prosecution despite there being plenty of reasons to investigate each and every one of them. Take Biden for example. The contents of Hunter’s laptop, plus Hunter’s former business partner’s testimony, provide plenty of justification for a potentially momentous investigation of the Resident in Chief by a subsequent administration.

If the Justice Department is going to pin its raid on “improperly removed documents,” then folks will have a LOT of questions about why Bill Clinton was never prosecuted. And don’t even get me started on Hilary Clinton’s mishandling of classified documents and her private classified email server — which were also never prosecuted. The FBI credulously accepted Clinton’s explanation of ignorance of the law and cheerfully overlooked her bleach-bitted evidence destruction.

Executing a warrant against ex-POTUS is dangerous. The apparent political weaponization of DOJ/FBI is shameful. AG must explain why 250 yrs of practice was upended w/ this raid. I served on Benghazi Com where we proved Hilliary possessed classified info. We didn’t raid her home

People are understandably doubtful about the raid, because there’s already a storied history of failed prosecution attempts against Trump. From Russia-gate to two impeachment cases — one for an allegedly mis-handled call with Ukraine where Trump wanted a certain former vice-president investigated, who is now directing the investigation against Trump. Not to mention that the Trump investigation is being run by an Attorney General who Trump rejected for the Supreme Court. No conflicts of interest there! Now consider how the FBI has lately been exposed selectively prosecuting Biden’s political adversaries, and has been outed for manufacturing evidence, like in Gretchen Whitmer’s “kidnapping” case.

Coincidentally, Stephen D’Antuono, the same FBI agent who led the Detroit field office during the embarrassing Gretchen Whitmer kidnapping-manufacturing evidence scandal, did such a bang-up job that he was promoted to lead the Washington D.C. office as the pandemic got under way in 2020. The FBI’s Washington D.C. office is almost certainly the same office that is now handling the Trump investigation and the raid.

As it happens, I recently sued a city and its police department over what is alleged to have been a politically-motivated SWAT raid that seized electronics. That was just a local affair. In order to execute a highest-profile search like this one against former President Trump, a bunch of important high-level stuff had to happen, and a lot of top-level Biden Administration officials must have been involved.

First, a senior FBI agent had to swear out an affidavit of probable cause that would support a search. As a history-making search, it is almost certain that both FBI Director Chris Wray and Attorney General Merrick Garland had to sign off on it, and may even have presented it to the court together. A federal judge had to review and approve the affidavit. We’ll eventually find out which judge it was, and I’ll bet you an all-expenses paid trip to Taiwan on Nancy Pelosi’s jet that the judge was appointed by a democrat president.

The judge would have asked the DOJ why a simple investigatory subpoena or ordinary search warrant couldn’t get the job done, and the DOJ would have to explain a concrete basis for the surprise raid that would overcome the Fourth Amendment concerns, not to mention the vast political implications. The FBI would have had to swear, for example, that they were seriously concerned about material evidence being destroyed, the documentary equivalent of a baggie of meth flushed down the john.

Even many lefty pundits recognize that this is a Rubicon moment, a kind of point of no return. The Rubicon metaphor is particularly apt, because when he crossed that river, Julius Caesar was on his way to deposing its democratic government becoming the dictator for life of the Roman Empire.

Yesterday on CNN Tonight, controversial anti-Trump Trump aide Alyssa Farah Griffin warned, “I hope that DOJ went about this meticulously and that there is a ‘there’ there because if not, it will tear the country apart.” She continued, “You [are] already seeing it, the rhetoric already that’s coming out from my fellow Republicans, and I’m really hoping that this was done for a credible reason and that it goes somewhere.”

If ANY reason is good enough, it better be a lot more solid than just a “credible” reason.

The Washington Examiner’s op-ed ran after 10m last night and concluded “You don’t have to be fond of Trump to realize what a dark turn of events this is … They are bringing our country right up to the edge of the Third World. It’s pretty scary stuff.”

I’d say they’ve leapt off the edge with bells on.

Obviously, there hasn’t been much time to process events, and conservative voices are just getting going. Echoing Trump’s letter, Governor DeSantis also referred to Banana Republics in his response tweet:

The raid of MAL is another escalation in the weaponization of federal agencies against the Regime’s political opponents, while people like Hunter Biden get treated with kid gloves. Now the Regime is getting another 87k IRS agents to wield against its adversaries? Banana Republic.

Expect all that outraged chatter to multiply every single day from here on into the foreseeable future.

🔥 Now, let’s talk implications. The GOP House Judiciary’s twitter account expressed the first and most significant implication — the raid shows there are now no limits and everyone is in the crosshairs. Top GOP donors, for one example.

Second, conservatives are furious and they’re just getting started.

Third, Joe Biden just found something that can eclipse inflation and the economy as an electoral issue. Every candidate will have to weigh in on this; many will want to avoid talking about it, but it won’t work. This raid — and what should be done about it — will almost certainly become the defining issue of the 2022 midterms.

Fourth, journalist Julie Kelly has followed the January 6th prosecutions from the beginning and has even already published a book about them. She credibly warned that Trump’s arrest is now inevitable:

No one on this side has followed DOJ/FBI prosecution of Jan 6 than I have. I’ve warned for months this was coming—indictment is next. Biden regime and House Democrats have created an expectation they must fulfill. Next is Trump in handcuffs. Inevitable.

Finally, this entire post is a hot take. We only know for sure the raid happened. We don’t know anything else for certain yet; it’s all guesswork. This story is going to continue to develop over the next days and weeks and get a LOT more interesting, if that’s possible.

🔥 Thoughts and reflections. My first thought was that President Trump needs to thoroughly sweep his property for electronics when he gets back. It might not be so much about what the FBI took, as what they left behind.

Second, did Trump know it was coming?

Trump two nights ago – “We are a nation that has weaponized its law enforcement like never before against the opposing political party.”

Third, the FBI has been circling Comet Ping Pong’s grease trap for years. A few recent examples include:

For whatever reason, none of those things was enough to galvanize any significant pushback. And I’m not the only one who noticed:

I said from the start this was coming. I reported on this for 18+ months to defend those wrongly accused to build the case against Trump. With few exceptions, no one in GOP cared. They ignored my reporting as hundreds of lives were destroyed. GOP owns this and all the damage.

But this raid is going to finally do it. Something has to give. The pressure on the GOP will be irresistible. Governors like DeSantis and maybe Abbott may begin talking about limiting federal activity in their states, as Arizona’s Republican gubernatorial candidate Kari Lake suggested last night: 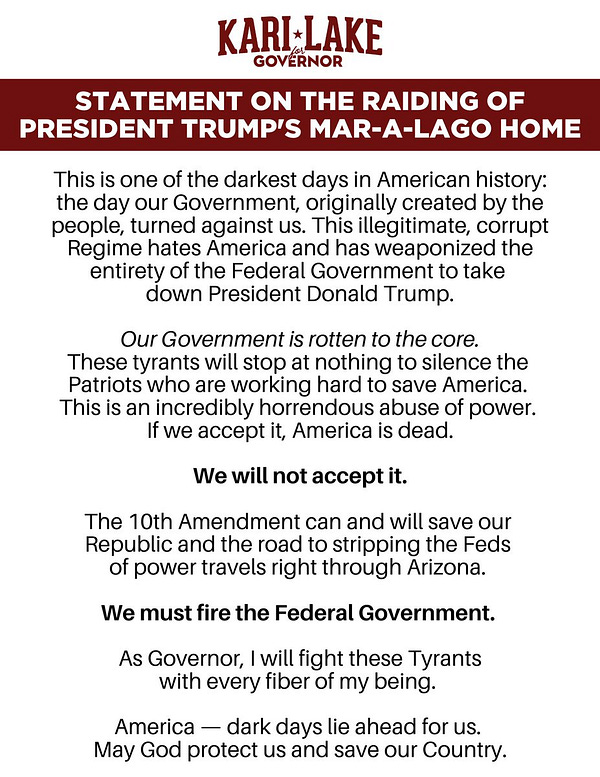 Fourth, the people who planned this raid are salivating for conservatives to make missteps, such as through civil disobedience. There have already been some reports from folks who went to protest outside the Trump residence yesterday that by 11pm federal agents were taking their photos and license plate numbers.

.@CryptoLawyerz reports that feds are swarming the crowd of hundreds of Trump supporters near Mar-a-Lago “taking pictures of people’s faces” and photographing car license plates. “The agents are now amongst us. They’ve taken a perimeter stance around everyone.”

In conclusion, my initial thinking is that any response to this should be carefully-considered and strategic, and people need to avoid taking the bait to create a pretext for more investigations and prosecutions of conservative protesters. “Behold, I am sending you out as sheep in the midst of wolves, so be wise as serpents and innocent as doves.” Matt. 10:6.

For his part, President Trump seems optimistic. He dropped a new campaign ad on TruthSocial following the raid. It ends with the words, “… the best is yet to come.”

Joe Biden is infecting our Banana Republic with monkeypox. You know how that works. 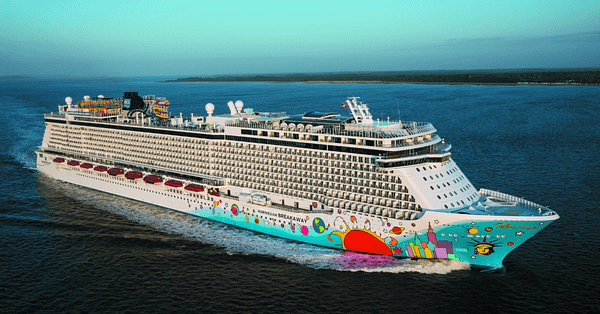 I guess they got the message about all those fully-jabbed ships that kept catching covid. Progress! Get cruising!

Have a terrific Tuesday, and I’ll see you back here tomorrow for more.

If you can, I could use your help getting the truth out and spreading optimism and hope: https://www.coffeeandcovid.com/p/-learn-how-to-get-involved-