Oh, the USA is well on its way to censership by the Left.  You an tell by the absolute silence….   mrossol 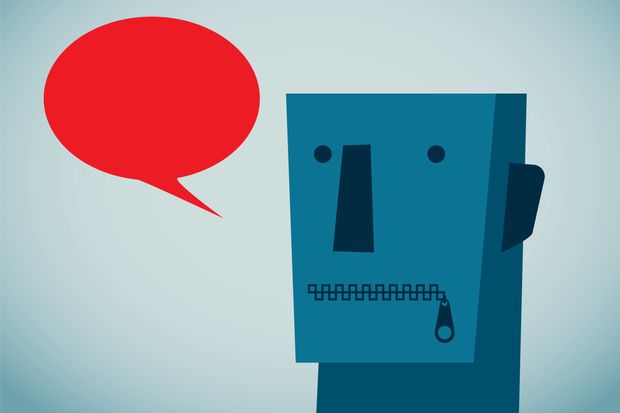 In 1789, America’s Founding Fathers, acutely aware of the political bloodbaths that had consumed Europe for centuries, created a system in which disagreements would be arbitrated by periodically allowing the public to turn their opinions into votes. The majority would win the election. Then, because political disagreement never ends, you hold more elections. Aware of the natural tendency of factions and majorities to want to suppress opposition opinion, the Founders created a Bill of Rights for all citizens, including what they called, with unmistakable clarity, “the freedom of speech.”

Nothing lasts forever, and so it is today in the U.S., where the pre-liberal idea of settling disagreements with coercion has made a comeback.

In the past week, the editorial page editor of the New York Times, the editor of the Philadelphia Inquirer and the editors of Bon Appétit magazine and the young women’s website Refinery 29 have been forced out by the staff and owners of their publications for offenses regarded as at odds with the beliefs of the current protests.

It is impossible not to recognize the irony of these events. The silencers aren’t campus protesters but professional journalists, a class of American workers who for nearly 250 years have had a constitutionally protected and court-enforced ability to say just about anything they want. Historically, people have been attracted to American journalism because it was the freest imaginable place to work for determined, often quirky individualists. Suddenly, it looks like the opposite of that.

The idea that you could actually lose your job, as the Inquirer’s editor did, because of a headline on an opinion piece that said “Buildings Matter, Too” is something to ponder. It sounds like a made-up incident that one might expect in a work of political satire, such as George Orwell’s “Animal Farm.”

The issue here is not about the assertion that racism is endemic in the U.S. The issue is the willingness by many to displace the American system of free argument with a system of enforced, coerced opinion and censorship, which forces comparison to the opinion-control mechanisms that existed in Eastern Europe during the Cold War.

In 2006, the movie “The Lives of Others” dramatized how the Stasi, the omnipresent East German surveillance apparatus, pursued a nonconforming writer, whose friends were intimidated into abandoning him. To survive this kind of enforced thought-concurrence in the Soviet Union or Communist Eastern Europe, writers resorted to circulating their uncensored ideas as underground literature called samizdat. Others conveyed their ideas as political satire. In Vaclav Havel’s 1965 play, “The Memorandum,” a Czech office worker is demoted to “staff watcher,” whose job is to monitor his colleagues. You won’t see Havel’s anticensorship plays staged in the U.S. anytime soon.

Other writers during those years of thought suppression sometimes wrote in allegory or fables. In Russia, writers called it “Aesopian language.” We’re not there yet. Instead many writers and media personalities here have chosen to participate in keeping opinion and even vocabulary inside restricted limits.

Some will object that it is preposterous to liken them to a communist party. But social media has become a partylike phenomenon of ideological and psychological reinforcement. It avoids the poor public optics of China’s Cultural Revolution in the 1960s and ’70s, when dissidents were paraded in dunce caps. Today, endlessly repeated memes on social-media platforms, such as “silence is violence,” reduce independent thought to constant rote reminders. Instead of the Stasi, we have Twitter’s censors to keep track of dissidents.

Alarmed parents saw years ago that platforms such as Facebook were being used to humiliate and ostracize teenage girls. It is disingenuous to deny that this same machinery of shaming has been expanded to coerce political conformity.

It is also disingenuous to deny that this ethos sanctions the implicit threat of being fired from one’s job as the price for falling out of line just once. It’s beginning to look like nonlethal summary execution.

The Marxist philosopher Herbert Marcuse argued in 1965 that some ideas were so repugnant, which he identified as “from the Right,” that it was one’s obligation to suppress them with what he called “the withdrawal of tolerance.” Marcuse is a saint on the American left.

The ingeniousness of this strategy of suppression and shaming is that it sidesteps the Supreme Court’s long history of defending opinion that is unpopular, such as its 1977 decision that vindicated the free-speech rights of neo-Nazis who wanted to march in Skokie, Ill. But if people have shut themselves up, as they are doing now, there is no speech, and so there is “no problem.”

Free speech isn’t dead in the United States, but it looks like more than ever, it requires active defense.