It wasn’t a terrific week for the NATO gang. In summary:

— The European Union tried to ban the purchase of Russian oil; the move was blocked by EU member Hungary. Russia continues to sell oil into the EU — but now, requiring payment in Rubles, which makes Putin laugh like a maniacal cartoon hyena. At these sky-high oil prices, the EU is basically paying Russia for the Ukraine war.

— This week NATO voted to admit Finland and Sweden as new members, which infuriated Russia, to say the least, but NATO member Turkey vetoed the proposal. So the vote failed. Russia has warned it will expand its nuclear weapons installations if NATO admits either nordic country, but NATO has continued pursuing the admissions anyway. Some experts think NATO can flank Turkey’s veto, but you have to hand this round to Putin.

By all reports, Turkey’s Erdogan is aligned with the Kremlin.

— Yesterday, Reuters ran an article headlined, “Russia’s Inter RAO to Halt Power Exports to Finland Due Lack of Payment.” In other words, they’re cutting the power off. Finland says it doesn’t care, it only gets 10% of its power from Russia anyway and insists it DID send the check.

— Heroic Senator Rand Paul has managed to block the fast-tracking of the new $40B appropriation for Ukraine in the Senate. That means arms shipments to Ukraine could end by May 19th unless the bill is finally approved.

Paul explained it on the Senate floor this way: “If this gift to Ukraine passes, our total aid to Ukraine will almost equal the entire military budget of Russia. And it’s not as if we have that money lying around, we will have to borrow that money from China to send it to Ukraine.” 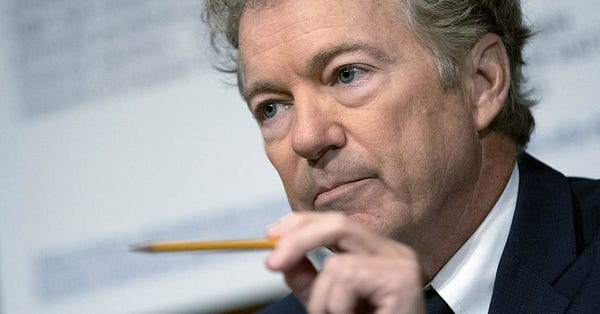 If you believe that helping Ukraine is admirable, but the U.S. has already helped a lot, and we can’t afford to be borrowing MORE money from China right now, and you’re concerned whether the $40B will even make its way to the frontlines of the Ukraine war effort and do any good anyway, it’s time to message your senator. I suggest doing it right now. I just did mine.

— Russia began a new phase in the war, now encircling the large Donbas region in southeastern Ukraine, about the lower half of the country. I keep hearing in corporate media about how Russia is always having devastating losses in Ukraine but then, Russia always seems to keep gaining ground there.

An Economist article yesterday admits “Russia now controls [] most of Donbas.” But don’t worry, the Economist reassured everybody that Putin’s “grip is precarious and Ukraine is determined to liberate its territory.” Well, it’s okay then. Pentagon Press Secretary John Kirby, who recently bragged about helping Ukraine kill Russian generals, said Ukrainian forces are mounting “a stiff and an effective” resistance to the latest moves.

From personal experience, “stiff and effective” is always better than limp and ineffective. So.

Reports this morning also concede that Russia now controls the Ukrainian port city of Mariupol, which corporate media previously promised would be a disaster of epic proportions for the Kremlin. No so much, apparently.

— Ukraine’s application to join the European Union failed. Not enough votes in favor.