Can you believe this is happening in the United States of America? If patriots do not resist this blatant trashing of citizen rights, soon they will all be gone… mrossol 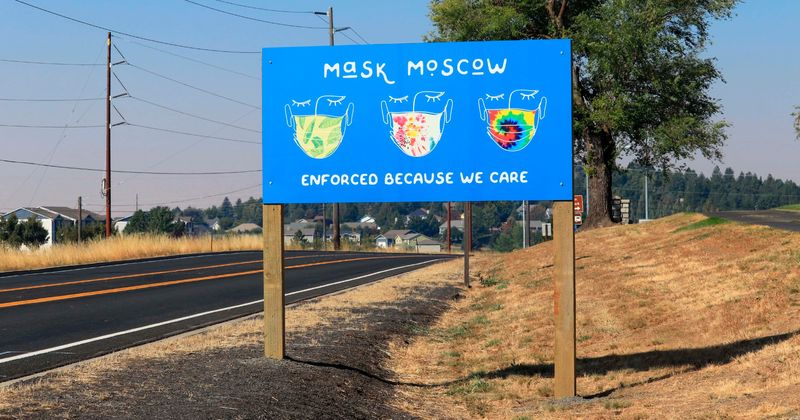 A highway sign in the city of Moscow, Idaho reminding citizens to wear masks (Getty Images)

MOSCOW, IDAHO: After three residents were arrested in 2020 for not wearing masks at an outdoor service, their church society is now suing the city of Moscow, Idaho, among other authorities, for violating their constitutional right.

The Thomas More Society filed the lawsuit on behalf of the three arrested – Gabriel Rench, Sean Bohnet, and Rachel Bohnet, who are suing the City of Moscow, Idaho, along with the city’s police chief, the prosecuting attorney, and two arresting officers who booked the three.

News of this comes much after approximately 300 people made headlines in September 2020 for assembling outside the city hall of the Idaho town, located along the state border with Washington. With a population of about 25,000 people, the town is about 80 miles south of Spokane, Washington. Organized by the Christ Church, the group had gathered to sing psalms as part of the evangelical congregation’s protest. The event saw about 20 minutes of singing, protesting how Moscow mayor Bill Lambert had mandated the use of face masks.

City officials had arranged small yellow dots six feet apart in the parking lot to socially distance all the participants at the protest, including Rench and the Bohnets. A county magistrate judge dismissed the case against Rench in January, after which he had told The Daily Wire that cops had approached his mother mid-event and asked if she was with him. When he put his arm around his friend, they asked for his identification too.

Rench refused to provide any identification and said he was exercising his First Amendment rights when he was cuffed and taken to the county jail along with the Bohnets. They were then detained for hours, after being incarcerated for violating mandatory rules to wear face masks in public and social distancing orders.

Placed in a small cell with Rench after their arrests, Sean Bohnet told the outlet “We thought a city that would premeditatively break the law in order to detain and jail those lawfully not wearing masks would at least offer one to incarcerated people,” Bohnet said. “However, we were in good company. Staff at the jail occasionally had no issue with letting their faces freely shine too.”

Michael Jacques, the special counsel of Thomas More Society, who is representing the three churchgoers said in a statement to the outlet that the town of Moscow “violated its own ordinance when law enforcement wrongly arrested” his clients. During the dismissal of the case in January, it was conceded that city codes allow the exemption of “any and all expressive and associative activity protected by the US and Idaho constitutions, including speech, press, assembly, and/or religious activity.” Jaques also claimed the officers who arrested his clients, “demonstrated reckless indifference to the defendants’ First Amendment rights.”

“These worshippers had participated in a church sing [event] in the past under the same mask ordinance without any issues and were exercising their freedom as Americans to worship as the Constitution allows,” he added. “However, the city was so eager to make an example of Christ Church’s opposition to its restrictive Covid rules that the officers failed to follow the mandatory exemptions listed in the city ordinance. A motto of government in prosecuting its citizens is that ‘ignorance of the law is no defense,’ and when they recklessly deprive its citizens of their freedoms, ignorance will not be a defense for the government.”

The lawsuit accuse authorities of being aware of the First Amendment protections within the Mayor’s emergency order at the time the three plaintiffs were arrested. It also claims their rights to the Fourth Amendment were violated too. Charges were allegedly dismissed following public humiliation and legal fees, and Jaques noted: “The lives of Mr. Rench and the Bohnets were disrupted not only by the inappropriate actions of law enforcement officers but also by the city’s prosecuting attorney and other officials who did not immediately act to negate their unlawful detainment.”

The Moscow City Council has since changed its ordinance regarding emergencies, to ensure it’s exercised on all people and activities, including political speech. Such a revision is unconstitutional, believed Jaques, who claimed at the Wednesday press conference on March 24 that their lawsuit is mainly to stress on local authorities their limitations. Rench told The Daily Wire how the city’s refusal to admit they had violated public rights is leading to discord. “Instead, the city council revised its order to target myself and others who would exercise their constitutional rights,” he said. “The council’s actions have fragmented Moscow and increased hostility in the broader community.”

Being absolved by the court has turned Rench into a pariah in the largely liberal town, Rench shared. “Even after I won and got my case dismissed, a lot of liberals in the community were mad at the city for dismissing the case. They were mad at the judge for dismissing my case. So I was right, and yet I was still wrong to the liberals in our community.” Moscow residents have reportedly flipped him off and cursed him out since. Nathan Wilson, the son of Christ Church senior pastor Douglas Wilson, also shared: “It’s just kind of sad to discover where we are now and what all this Covid tension and all these mask orders and everything else has turned us into.”