Sounds like what my “Art Salon” is all about!

Sometimes the stories and speculations that surround works of art can deflect from our interest in the work itself. That’s certainly true of Titian’s glittering “Portrait of a Lady in White” (c. 1561), currently in Southern California on loan to Pasadena’s Norton Simon Museum from the Gemäldegalerie (Picture Gallery) of Germany’s Dresden State Art Collections—home to some of the world’s best-known old master paintings. The lady’s enigmatic glance and lavish, yet monochrome, attire provide ample excuse for conjecture as to both her identity and the assertively rhyming nature of her costume. It’s unusual to have a catalog for a single-painting exhibition, but this one is exceptionally rich in resources for information about the canvas’s history, travels and recent conservation, as well as details about the sitter’s costume, jewelry and possible identity. 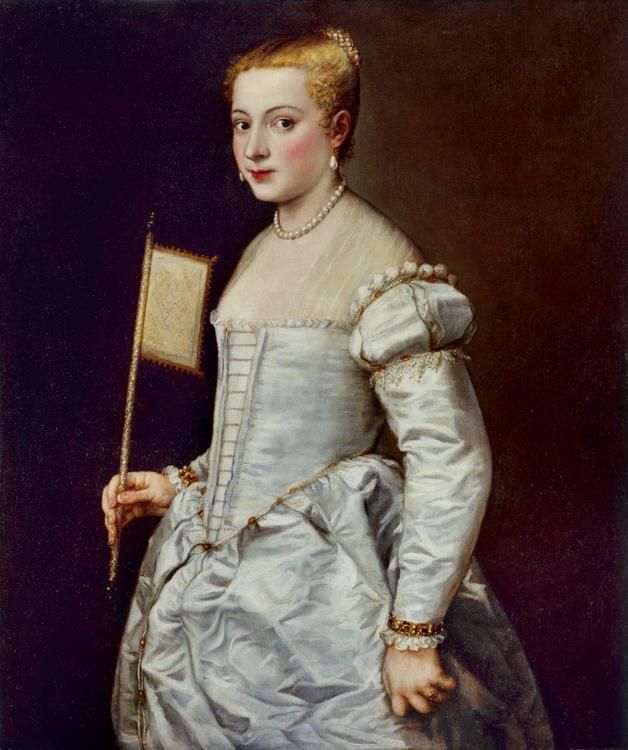 Born around 1488/90, Tiziano Vecellio, known to us as Titian, was apprenticed as a youth to Venice’s most eminent painters, the brothers Gentile and Giovanni Bellini, and by the time of his death during the 1576 plague epidemic he had spent years as the most internationally acclaimed of many great Venetian Renaissance artists. This portrait is among Titian’s late works, and there is documentary evidence suggesting that this is the same painting the artist sent to Alfonso II d’Este, Duke of Ferrara, Modena and Reggio, in 1561. When August III, Elector of Saxony and King of Poland, purchased a hundred works from the Este Collection in 1746, the “Lady in White” was included, and it is already listed in the elector’s paintings catalog of 1765. The work remained in Dresden until 1945, when it was among the art taken to Moscow by the Soviets, who returned it to Dresden, then part of the German Democratic Republic (East Germany), in 1955.

The depiction of such an elegant lady inevitably leads to speculation as to her identity, and there have been suggestions that she was a model, a courtesan, or one of the artist’s daughters. Moreover, there had been two versions of the work—the presumably slightly earlier one, sent to Philip II of Spain in 1559, is long lost and now known only via a 1628/29 copy by Rubens (now in Vienna). As the Gemäldegalerie’s curator of Italian painting, Andreas Henning, writes in the catalog, the fact that Titian not only painted the same subject twice, but “took up the same model…in various other paintings, clearly shows that the woman portrayed is not seen as much as a real person as an ideal.”

That appears evident to this viewer, based on the various lyrical effects that coalesce to give this painting its impact. Despite eyes that peer forcefully to the viewer’s right, the lady’s beauty doesn’t suggest anything much about her personality. The red lips, rosy cheeks and finely plucked eyebrows could serve as an ad for a cosmetics company. Even the gossamer covering of the lady’s shoulders and décolletage seems primarily about Titian’s painting virtuosity; the lack of tension on the decorative lacing across the front of her corset tells us that the artist has only the faintest interest in visually defining her bust. Rubens’s copy of the lost, slightly earlier, version shows no such restraint, as he manages to slightly emphasize the contours of her bosom and dangles a gemstone pendant between her breasts. Was this a characteristic “Rubenesque” interpretation or was Titian’s earlier now-lost version also a tad racier?

Discussions as to whether the lavish white dress might be wedding attire seem beside the point. This is a visual feast replete with generous servings of old-fashioned visual rhymes. The pearl hairband, earrings and necklace rhyme with the fabric puffs at the top of her left sleeve and continue on the ruching of the bodice. The gold bracelets rhyme with the bits of gold thread and the lady’s golden hair, and even the clearly delineated gold that holds the left earring’s pearl, and the gold ring on her left hand. The deep red stone in that ring, in turn, rhymes with the lady’s red lips and paler red cheeks, fading into the barely palpable rose tone of her face and bodice. The flag/fan she holds appears in other paintings of the time, but it’s also suggestive of the lily held by the archangel Gabriel in Annunciation paintings; in those works, Gabriel generally displays minimal affect, in contrast with the Virgin, and that’s how this lady appears as well.

This may not be the earliest painting that suggests an intoxication with the challenge of painting gorgeous satin. But surely Titian was flinging down a gauntlet that was picked up with great panache in the 17th century by a range of artists such as Rubens, Van Dyck, Ter Borch and others, vying for the most dazzling displays of that fabric. These effects remained a staple of show-off portraiture through the 18th and 19th centuries. Both Whistler and Sargent, for example, were challenged in wholly different ways by painting ladies in white dresses. An art wag’s hybrid of Sigmund Freud and Frank Stella might pronounce that “sometimes a painting is just a painting.” In the case of Titian’s “Portrait of a Lady in White,” we can only respond, “But oh, what a painting!”

—Mr. Freudenheim, a former art-museum director, served as the assistant secretary for museums at the Smithsonian.