It’s not an overstatement to describe “ Castiglione: Lost Genius. Masterworks on Paper From the Royal Collection,” at the Kimbell Art Museum, as “revelatory.” I confess, however, that I hadn’t planned to see the exhibition. I simply happened to arrive in Fort Worth on the evening the show opened, visiting my friend George Shackelford, the Kimbell’s deputy director. “You’re going to be surprised,” George said, as we headed off to the museum.

I wondered. The Genoese painter Giovanni Benedetto Castiglione (1609-1664) was one of those obscure 17th-century Italians whose name I always had to check on museum labels. I vaguely recalled once having been impressed by some amazing sheep and a wonderful turkey in a picture in a French museum, but Castiglione had never firmly installed himself in my mental image bank. There were elaborate prints, I thought, but I hadn’t paid much attention to them, either. I seemed to remember, though, that he was known in his lifetime for explosive bad behavior, rather like his predecessor Caravaggio. 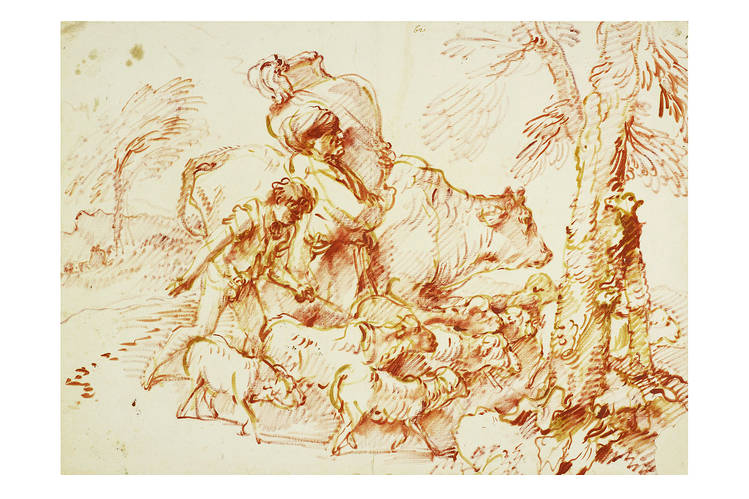 George was right. Castiglione’s drawings proved to be dazzling, the etchings were gorgeous, and the monotypes—which I had been unaware of— were extraordinary. The most striking drawings, made principally between the mid-1630s and mid-1650s, were of biblical stories or secular pastoral scenes, with the occasional foray into mythology. Many of them related to paintings, but a group of highly finished, unusually large drawings, dating from the 1640s and 1650s, at the heart of the installation, remained a mystery. Rather than being preparations for any of Castiglione’s known paintings, they seem to have been made as ends in themselves—a highly unusual notion for the time. (The wall texts suggested they may have been intended as substitutes for commissioned paintings that the famously irascible artist didn’t complete.)

Whatever their subject or intention, Castiglione’s drawings were all packed with agile, gesticulating figures and personable animals, very recognizable but conjured up with a minimum of loose, apparently rapid strokes. Each participant, human or otherwise, demonstrated an individual, clearly expressed response to the event depicted.

This kind of narrative “acting,” meant to be followed like a text, was evidence of what Castiglione learned from his celebrated French contemporary, Nicolas Poussin, whose carefully staged works the slightly younger man from Genoa encountered during an extended sojourn in Rome. But Castiglione’s astonishing range of brushmarks seemed wholly his own: scribbles, smudges, crisp parallel strokes, fluid sweeps, controlled pools and splotches. This vocabulary of touches not only evoked lively images, but also created an all-over expanse of flickering darks and lights—a tonal fabric so complex and rich that it was tempting to consider it independently of its subject matter, like an expressive 20th-century abstraction.

The richness and dynamic pulse of the drawings was fascinating, as were the freedom and seeming ease with which Castiglione assembled his complicated compositions. Even more compelling was learning from the exhibition’s organizers and authors of its comprehensive catalog, the Castiglione scholar Timothy J. Standring and Martin Clayton, head of prints and drawings, Royal Collection Trust, that these complicated, apparently effortless visual dramas had been executed alla prima, in sepia-toned oil paint using a dry brush, with no underdrawing or preparation of any kind. This improvisatory way of working seemed strangely modern, like the unstable, light-struck crowds of figures, animals and landscape elements that resulted from this exuberant approach.

Equally dazzling light effects were evident in the etchings, for which Castiglione was celebrated in his day. Mostly of religious subjects, they were testimony to their author’s familiarity with his near-coeval Rembrandt’s prints. Castiglione’s originality was manifest in the monotypes—a technique he seems to have invented, in which a metal plate is coated with sticky ink, white elements are scraped or wiped out, and one or two images printed. The dark and light contrast in Castiglione’s monotypes was so abrupt, their bold, staccato marks so economical and spontaneous, that it was difficult to believe that these startling images were made in the mid-17th century.

The supercharged intensity of the monotypes, however, made it easy to believe the stories about Castiglione’s notoriously volatile temper, which troubled his relationship with patrons and tainted his reputation during his lifetime. After his death, it seems, his virtuosity outweighed tales of his bad character. The 90 drawings, etchings and monotypes in “Lost Genius,” for example, have been in the British royal collection since 1762, when King George III purchased more than 200 of Castiglione’s works on paper from a former British consul who assembled them earlier in the century, when the artist was acclaimed and appreciated. Yet in the 19th century, Castiglione’s improvisatory style fell out of favor and he was essentially forgotten. Messrs. Standring and Clayton deserve enormous thanks for reintroducing us to a remarkable artist. And I’m very glad I went to Fort Worth.

Ms. Wilkin is an independent curator and critic.