“…A Christmas celebration in disguise?” Its coming to that, yes.
=======
As we moved into December and what for some time has been called “the holiday season,” the Office of Diversity and Inclusion at the University of Tennessee issued a “best practices” directive for the campus to “ensure your holiday party is not a Christmas party in disguise.”

A Christmas party in disguise? Has it come to this?

Aghast state legislators got the directive rescinded, but the Christmas killers will get the last laugh. In fact, they’ve already won. This is the year Christmas died as a public event in the United States.

We know this after touring the historic heart of public Christmas—Fifth Avenue in New York City.

For generations, American families have come to New York in December to swaddle themselves in the glow and spirit of Christmas—shops, restaurants, brownstones, the evergreen trees along Park Avenue, bar mirrors and, most of all, Fifth Avenue’s department-store windows. You couldn’t escape it, and why would you want to?

A friend, an ardent atheist, would be inconsolable if he couldn’t sing Handel’s entire “Messiah” with 3,000 other revelers this month at Lincoln Center. Even if the only god you worship is yourself, December in New York has always been about the bustling good cheer flowing from the Christian holiday.

For many, December required a pilgrimage to Saks Fifth Avenue, Lord & Taylor and Bergdorf Goodman. No matter the weather, people walked the mile from 38th Street to 59th Street and jammed sidewalks to see these stores’ joyful Christmas windows.

Stay home. This year Fifth Avenue in December is about . . . pretty much nothing, or worse. 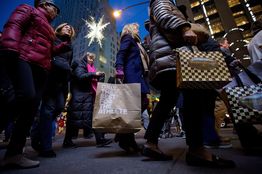 To be sure, the magnificent Rockefeller Center Christmas tree still stands, and directly across on Fifth Avenue is St. Patrick’s Cathedral, its facade washed and hung with a big green wreath. But walk up or down the famous avenue this week and what you and your children will see is not merely Christmas scrubbed, but what one can only describe as the anti-Christmas.

Forget public Nativity scenes, as court fiat commanded us to do years ago. On Fifth Avenue this year you can’t even find dear old Santa Claus. Or his elves. Christmas past has become Christmas gone.

A luxuriating woman lies on a table, her legs in the air. Saks’ executives, who bear responsibility for this travesty, did have the good taste to confine to a side street the display of a passed-out man on his back (at least he’s wearing a tux), spilling his martini, beneath a moose head dripping with pearls. Adeste Gomorrah.

But you haven’t seen the anti-Christmas yet. It’s up at 59th Street in the “holiday” windows of Bergdorf Goodman. In place of anything Christmas, Bergdorf offers “The Frosty Taj Mahal,” a palm-reading fortune teller—and King Neptune, the pagan Roman god, seated with his concubine. (One Saks window features the Roman Colosseum, the historic site of Christian annihilation.)

There is one holdout to the de-Santification of America: In Macy’s windows at Sixth Avenue and 34th Street—as in “Miracle on 34th Street”—the characters of “A Charlie Brown Christmas” frolic in Yuletide splendor.

The Christmas-less feeling along once-famous Fifth Avenue this year is similar to the loss one feels reading the last lines of “Casey at the Bat”—a shattering, historic strikeout.

The erasure of Christmas between the grinding stones of secular fanaticism will persist. Eventually the holiday will be forbidden, forgotten and filed away in attic boxes. But maybe God, in His usual mysterious way, is nudging us back toward the beginning.

Once the inevitable Federal Office of Diversity and Inclusion has joined with the commercial cynics at Saks and Bergdorf’s to suppress even Santa, what pretext will parents have to give gifts to their Christmas-cleansed children? Amazon Day?

In the post-Christmas era, the infant Jesus and Santa Claus will go back to the catacombs of early Christian life, where you won’t have to say happy holidays to anyone. Christmas as we know it will die off, and what will be left on December 25th will look a lot like Thanksgiving, but smaller.

Unless celebrating Christmas in America becomes a prosecutable crime, as it was in the Soviet Union, families will go to church in the morning to renew the beginnings of their faith and then spend the day at home listening to pirated copies of the carols and hymns on Bing Crosby’s “White Christmas” album. For radical refuseniks, I recommend playing, at the highest possible volume, “The Bells of St. Mary’s” on Phil Spector’s “A Christmas Gift for You.”

As for Saks and the other Fifth-Avenue sellouts, I have two words this season. They aren’t Merry Christmas.