This article does not prove anything, but it is a data point worth considering.
===============
Research shows that a diet high in protein and low in carbohydrates can help shed pounds and normalize blood-glucose levels, improvements that lower the risk of diabetes and cardiovascular disease.

But will you live longer on a high-protein, low-carb diet? Two studies in the current edition of the scientific journal Cell Metabolism suggest the opposite. One involved an experiment conducted on mice, the other an 18-year study of humans who had divulged their dietary habits. Both studies found a strong association between longevity and a low-protein, high-carbohydrate diet, although the human study bore a twist: Beyond age 65, higher protein levels appeared to promote longevity.

“Those high-protein diets were developed with a shortsighted vision,” said Valter D. Longo, a University of Southern California professor of gerontology and biological sciences and the lead author of the human study. “On a high-protein, high-fat diet you can lose weight, but in the long run you may be hurting yourself.”

These studies are anything but definitive, showing only associations derived from highly limited evidence. But in gerontology, the influence of protein consumption on longevity is a hot topic. Last year, the American Federation for Aging Research hosted a symposium on “Optimal Protein Intake for Older Adults,” featuring a panel of scientists from academia and industry. No concrete answers emerged, except perhaps that protein consumption influences health in ways that are complex.

In the human study, those consuming high levels of plant-based protein had a threefold increase in cancer mortality but no higher rate of overall mortality. Consumers of animal protein had big increases in both. That suggests, as other research has shown, that there may be benefits from minimizing consumption of animal-based protein. “These results indicate that respondents ages 50 to 65 consuming moderate to high levels of animal protein display a major increase in the risks for overall and cancer mortality,” the researchers concluded.

For subjects 66 and older, the opposite proved true: Higher protein consumption was associated with greater survival. Gerontologists say this makes sense, because the ability to absorb protein appears to diminish in the aging body, requiring perhaps greater consumption.

Even then, though, the takeaway is somewhat complicated. Americans tend to consume the bulk of their protein at dinner, and the body isn’t always able to process an entire day’s worth in one sitting, said Dr. Volpi, who wasn’t involved in either study. “It appears you can better use the protein you need if you distribute it across three meals, especially if you are a senior,” she said.

In one study, 858 mice were fed one of 25 diets with differing ratios of protein to carbohydrates. Those that ate higher ratios of protein were leaner. But they didn’t live as long. “Median life span increased (by about 30%) from about 95 weeks to 125 weeks as the protein-to-carbohydrate ratio decreased,” said the study, conducted by researchers in Australia. “Our results show that healthy aging is not achieved in mice fed high protein diets.”

Of course, mice aren’t human. Indeed, the Australian researchers acknowledge that the same results may not be achieved in a different strain of mice. 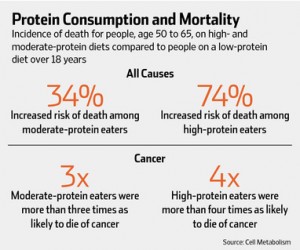 In the 50-to-65 age range, “subjects in the high protein group had a 74% increase in their relative risk of all-cause mortality, and were more than four times as likely to die of cancer when compared with those in the low-protein group,” the researchers reported.

One prominent diet expert and high-protein opponent, physician Ron Rosedale, saw the studies as vindicating his longtime warning about the risks of excessive protein. But Dr. Rosedale, who advocates a diet high in so-called healthy fats such as those found in avocados, argues that high levels of carbohydrate consumption are no less dangerous. “If people take these studies as a thumbs up for high carbohydrates, that’s missing the point,” he said.

Write to Kevin Helliker at kevin.helliker@wsj.com

High-Protein Diets May Not Be Answer for Longer Life – WSJ.com.