‘Stability” has been the goal of civilized foreign policy since the dawn of the Cold War and arguably since the Congress of Vienna, which posited a framework for international relations in 1815. Stability, whose virtues are many, has had a worthy run. It’s done.

Stability is done as we have known it, at least until political leadership evolves a better understanding than they have shown during the events in Egypt of the permanently unstable world they’ve tumbled into. The man who pitched the curators of national stability into their current shocked state—evident this week in the streets of Cairo and before that in the capital of Tunisia and before that in the U.S.’s November elections—is William Shockley.

Shockley, a physicist, co- invented the transistor. The transistor replaced the vacuum tube as the central component of all electronic devices. The transistor enabled Twitter, Apple, Facebook, Microsoft, an ocean of apps and the unending storm of information that blows all of us, including politicians, here and there like leaves. Why would anyone think it possible in such a world for a Hosni Mubarak to maintain stability with the methods he’s used since 1981?

The point here is not to argue again that information and communication technology (ICT) has caused another colorful “revolution.” Nor is it to overstate the power of these technologies to enable democratic reform.

My point is merely to describe what is going on in front of our faces: This new, exponentially expanding world of information technologies is now creating permanent instability inside formerly stable political arrangements.

This stuff disrupts everything it touches. It overturned the entire music industry, and now it is doing the same to established political systems. 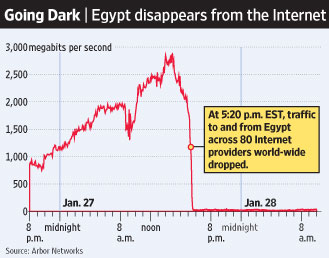 Here is how it works. In 2007, Egypt sentenced a blogger named Kareem Amer to four years in prison for insulting the president. Ten years ago, Mr. Amer would have simply disappeared, like all the others. So what if his family and 15 friends grumbled? Stability.Not now. Instead, Mr. Amer became an icon of regime repression. What changed? Instead of 15 friends whispering over coffee in a café, 15,000 can talk to each other all day and every day via Internet cafés about who’s getting tortured. According to the Open Net Initiative’s helpful country profiles, some one million Egyptian households have broadband access, often sharing lines.

Think what this means at the crudest level: Huge swaths of any wired population exist in a state of engagement. Instability. Before, stifled populations were mostly sullen. Now, all the time, they’re in mental motion.

Even if the Mubarak thugs somehow disperse the people in the street, they’ll return some day because there is no effective way to cap their ability to share grievances on a massive scale. Egypt earlier pulled the plug on its entire Internet. So what? No nation will turn it off forever.

The Egyptian government itself has been responsible for expanding ICT, even making cheap computers available. Tunisia’s autocrats wired their own nation, with some 1.7 million Internet users in a population of 10.2 million.

“Stability,” as currently defined by its advocates, is the vacuum tube of national politics—in Egypt, Tunisia and I would argue in the United States, China and pretty much anyplace that isn’t still using rotary phones.

Barack Obama and the Democrats just got hit with the same disruptive force in the U.S.  Whatever the health-care bill’s merits, Nancy Pelosi and her colleagues legislated as if living inside the old status quo when no one beyond the Beltway understood what their lawmakers did.  In the 1960s, when Congress created Medicare and Medicaid, can there have been 100 nonspecialists who had any clue what Congress was doing? But for a year millions read daily ObamaCare’s arcane details and shared opinions. That engagement fed directly into the historic November election shellacking.

This constant chatter about what government is doing to whom is why amped-up emotions are coursing through formerly stable places. Before ICT achieved critical mass, there was no chance that Tunisia, Egypt, Yemen and Jordan would erupt seriatim.

Nor is any of this a revelation. But somehow people in positions of political authority, whether Hosni Mubarak or foreign-policy establishments everywhere, including our State Department, act as if this is just troublesome background noise. Understandably so. It is hard to ascribe primal power to things with goofy names like Twitter and Facebook.

Nor is it obvious how political systems should adapt to an exponentially larger population of always-engaged people. One answer may be struggling to emerge in Egypt: elections. What’s the alternative? All the new political energy that Shockley’s tiny transistors unleashed has to go somewhere. Either it flows into the exhausting channels of organized politics, or it flows like hot lava into the streets. Iran is pursuing a third way: constant executions. Here’s guessing medieval tech won’t win.

Instability is the new status quo. As always, the politicians are the last to notice. Across the postwar period, stability has been plan A. It’s time for the smarter people in public life, from Riyadh to Washington, to start thinking about plan B.